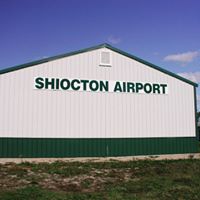 The Shiocton Flyers Club own and manage the Shiocton Airport. The club as it is now, was incorporated in 1960 as what was then the  New London Airport  which was  disbanded  in 1983.

In 1984, 20 area people came together and saw the need for an airport in the Shiocton area. These 20 people formed a corporation called the Shiocton Airport Association, Inc., and the land that is now runway 18/36 (North/South runway) was purchased. This property became the core of which, after several subsequent land purchases, is now the Shiocton Airport, also known as Whiskey 34.

The Shiocton Airport is one of a very small handful of PRIVATELY OWNED, PUBLIC USE AIRPORTS in the State of Wisconsin. Because we are privately owned, we do not accept the use of Federal or State monies for airport purchases, operations or improvements. Instead of your tax dollars, we are funded with membership dues, membership contributions and with the funds we are able to raise by putting on our Annual Fly-in. Even though we are privately owned, we abide by all Federal Aviation Administration regulations and are periodically inspected by the Wisconsin Department of Transportation for compliance of all applicable airport construction, markings and signage, approaches, hazards, airspace and operations. Safety is taken seriously.

The Shiocton Airport currently consists of two intersecting runways. Runway 18/36 (North/South) and Runway 09/27 (East/West). Both runways are approximately 2,500 feet long by 150’ wide. There is also a North/South taxi area immediately east of runway 18/36 which could also be used as runway 18L/36R.

There is also along the south side of runway 09/27, Hangar Row, which currently consists of 9 hangars, all of which currently enclose a total of 16 based aircraft. We also have an on-property maintenance facility for general airport maintenance and storage of grounds keeping equipment.

We have as a club, over the past several years, set up an Educational Endowment fund. We provide scholarships to area High School and Tech School students studying aviation programs. These scholarship applications are available at area High Schools and at Fox Valley Technical College and are due by May 1st every year. Our 2017 Scholarship recipient is currently enrolled at UA – Birmingham for Aviation Management.