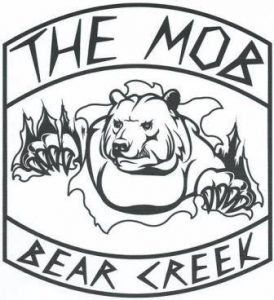 Our Clubs purpose is to further their enjoyment of motorcycling by providing organized activities. Some of these activities are motorcycle-orientated fundraising projects for the benefit of charities.

Ant Hill Mob Chapter 1 was formed in 1985 also known as “Bear Creek WI “ Chapter, when one member from Manitowoc moved to the Bear Creek area and approximately4 members of the Ant Hill Mob Osman Motorcycle Club that lived in the Bear Creek area thought it was a better idea at the time to start Chapter 1 due to travel concerns. It was brought up to the “Mother Club” at the time and was allowed to be established. It was decided to go on our own and have changed the name of our club to The Mob Bear Creek.

We currently do a Charity Ride the second Saturday of August, have Mobfest the first Saturday of June and have a charity 9 pin bowling tournament the week before the parade. We have also been adopting a needy family for Christmas and we donated 1200 pounds of dog food to the Happily Ever After Animal Sanctuary, a no kill shelter near Marion.We also attend various other motorcycle events throughout the year for support and to make donations.